The European Integrity Games project, supported by Erasmus+ Strategic Partnerships, enters this week a new phase of its development.

This project, which associates 6 European artistic companies, aims to question the notions of integrity, corruption and fraud in our society, through the design of role-playing games – escape games and interactive fictions.  The project will tackle 3 main themes: integrity in the digital age, governing with integrity and finally integrity in health and food. In total, the partners will develop 7 games in two different formats.

From October to March 2020, students from Sciences Po Paris and Bruno Freyssinet worked on the development of the first escape game – role-playing game addressing the themes of blockchain and cryptocurrency and their impact on integrity. More information here.  The first escape game scenario features 2 groups of players: the first one plays a mafia team in charge of laundering money using Bitcoins accounts, the second one plays the police team in charge of tracking down the fraudsters and arresting them before they manage to launder their money.

The project is now entering its second phase. 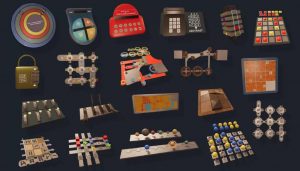 Towards the creation of a serious game – interactive fiction prototype

The idea is to adapt this escape game as an interactive fiction – serious game to be played individually online, on mobile or PC. The challenge at this stage is to develop a model that can be applied to the 7 games that will be developed throughout the project.

La Transplanisphère with the help of Odysseas Velentzas, collaborator of the Greek partner Ohi Pezoume, are currently thinking about the development of this first prototype and the technical solutions to implement it. The challenge is to create a mobile video game combining puzzles to be solved, interactive fiction and narrative adventure for an immersive, fun and instructive experience.

The aim of this game is to inform European citizens about issues related to blockchain and cryptocurrency, under the prism of integrity in our current societies. These new technologies, which are transforming practices in many sectors, are relatively complex. The aim of this interactive game is, therefore, to explain this technology and its implications in a playful way, by immersing the public in a money laundering scenario in which they will be the actors of the story.

Design of an immersive experience with the Unity game engine

The initial research for the design of this first game led the think tank to focus on the Unity 3D development platform. This multi-platform game engine is one of the most widespread in the video game industry, particularly for independent publishers. Thanks to its “asset store”, which offers additional content, many resources are available to create immersive games.

This week, we met with two stakeholders of the Unity universe. A Unity representative presented the possibilities offered by this game engine and we discussed together how it fits with our project. We also contacted Pierre, the creator of Target Studio, who has developed an asset to create escapes games on Unity. This asset offers many resources for the development of narrative adventures in a 3D universe, combining different puzzles and enigmas.

The project team has therefore decided to choose this solution for the creation of its serious games – interactive fictions.

Between enigmas to solve, hidden clues to find, mysterious messages and cinematics, the audience will be drawn into an adventure in the heart of the universe of blockchain and cryptocurrency.